Injectors What are they? Features and function 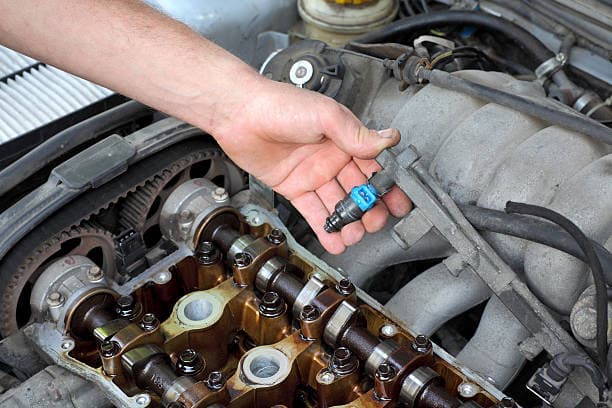 Injectors are one of the components of the fuel injection system. They spray a certain quantity of fuel towards the combustion chamber, which will mix with the air at high temperatures, thus achieving combustion.

The injection system supplies high-pressure fuel to the engine's compression cycle. It ignites when it comes into contact with air at high temperatures, causing combustion. This system consists of a displacement pump capable of injecting different amounts of fuel thanks to the pistons attached to each injector or the engine cylinder.

Therefore, the injectors are solenoid valves capable of opening and closing millions of times with a precise reaction to the electrical pulse that activates them without leaks or fuel leaks. They are responsible for supplying fuel to the intake duct or the precombustion chamber, depending on whether it is a direct or indirect injection system, respectively, in a sprayed form and without dripping so that the fuel is distributed as homogeneously as possible depending on the operating speed of the engine.

Components of an Injector

The injector is made up of seven parts. The first is the nozzle holder, a steel block that acts as a base structure to mount the rest of the components. Fuel enters the injector pressure chamber through this block.

The nozzle (or injector) is fixed to the nozzle holder with a threaded sleeve. The needle valve is mounted inside it, which makes it possible to form a sealed pressure chamber by covering the injector outlet holes.

The needle valve is a piston that acts as an injection gate. This valve closes the fuel passage when it is in a state of rest.

Another component is the push rod, which communicates the movement between the needle valve and the spring.

The sixth component is the adjustment screw, which adjusts the fuel injection pressure.

Lastly, the closing fitting. This seals the injector assembly and returns residual fuel to the tank. This small dose of energy is filtered between the needle valve and the nozzle holder during the injection process to lubricate the rest of the injector elements.

How does an injector work?

It is simpler than it might seem at first; Now, we will explain it to you step by step so that it is clear to you.

First of all, fuel from the injection pump feeds the injector inlet. This fuel, which passes through perforated ducts in the body of the injector, makes its way to the needle located in the lower part that obstructs the outlet hole when being pushed through a rod by a spring. In this way, the fuel cannot enter the combustion chamber. When the fuel pressure in the inlet duct increases enough, thanks to the high-pressure injection pump, the piston rod activates the injector needle spring, while the force with which the fuel will be sprayed is adjusted through the nut linked to the same stem. The energy flows from the marked inlet to the perforated duct in the nozzle holder.

The tip of the needle valve, which is attached to the end of the nozzle, is responsible for preventing the passage of fuel liquid through the holes when it travels under pressure through the injector ducts. This needle will rise when you introduce the atomized fuel to the combustion chambers. In the process, a small amount of energy is released upwards, allowing the hand, nozzle and other components to be lubricated before flowing out of the return line connection and back into the tank.

Now that we know how injectors work, we will classify them. Before, we classified them according to the holes they had, either with 4 or 6 holes. We are going to carry out this new classification according to its operation, where we will find two types:

They were typical diesel engines until the arrival of single-duct or common-rail injection systems. They use a feeding system to control the amount and moment of spraying the fuel mechanically. They were also used in the early days of injection in gasoline engines.

They are the most used in gasoline engines. They have multiple sensors that send information to the control unit to approve when and how much fuel must be supplied at any given time. Therefore, they are activated by the control unit and close by recovery of a spring or internal spring. They are currently used in modern diesel engines, with multiple injections in each cycle.

Now that we are clear about some concepts of the injectors themselves, we will comment on the most common cleaning methods since, as we all know, the components of our cars are not eternal, although we can extend their operating time. , as much as possible. For this, we will only have to apply good maintenance that includes appropriately cleaning them.

Therefore, as explained above, the injectors are responsible for spraying the right amount of fuel into the combustion chamber. The energy circulates continuously through them, being exposed to all the impurities that accumulate in the tank and passing to a greater or lesser extent to the fuel pump linked to the injectors.

Suppose we abuse the reserve, use poor-quality fuel filters, or take a long time to change them for whatever reason. In that case, we have all the ballots so that we cause premature deterioration of the injectors by dirtying them excessively. We are causing severe breakdowns in the injection system and damage to our engine.

A little dirt in the injectors can cause jerks on acceleration or deceleration. Still, if we do nothing about it, the cylinder will stop working due to the injector clogging, which leads to less power when canceling a cylinder.

Here we leave you the tool to check if our injectors are clogged.

Before reaching this situation, we can see if our vehicle shows any of these symptoms:

The injector may deliver less fuel due to clogging or dirt.

The injector may not have the correct spray pattern.

The injector may have several of the above problems.

If we notice any of these four symptoms, we must go to the workshop to carry out the corresponding maintenance to prevent greater evils, which would lead to unnecessary repairs.

In addition to taking the necessary measures using preventive mechanics, as we have mentioned, it is recommended that we clean the injectors approximately every 100,000 kilometres for the first time and then every 50,000 km so that we can extend their useful life by allowing them to function correctly for as long as possible.

There are different methods of cleaning the injectors, which is why we explain them to you below…

It consists of adding cleaning liquids to the fuel tank that unclogs the injectors. It is the most economical and easiest method to use. Still, not all vehicle manufacturers agree with its use since the aggressiveness of the chemical substances they carry can end up damaging the injectors in the long term.

In this system, a tank with the cleaning liquid is attached to the vehicle. Once the system is connected, the engine circulates the solution through the fuel rail until the bottle is depleted. As the cleaner is not diluted, it is more potent than the additives above, but due to the cleaning process, there is a higher risk of damaging the injectors.

With this method, we have to extract the injectors and place them on a test bench where they are washed, and different characteristics such as resistance, tightness, spray pattern and flow rate are measured. It is the most effective method since it allows us to correct the possible defect of each injector individually. Of course, before reinstalling the injectors, both the seals and gaskets that are placed are new.